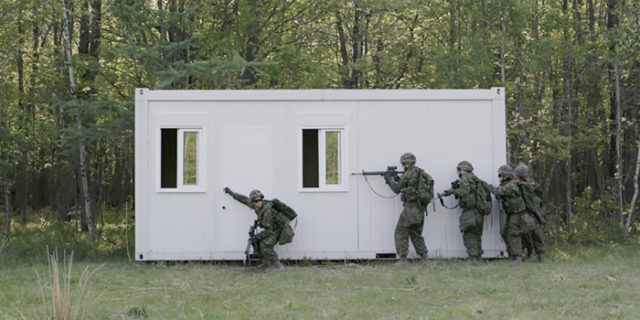 (April 30, 2018 – Toronto, ON) Time flies. Today is the fifth day of the 25th annual Hot Docs Canadian International Documentary Film Festival. As our regular readers know, our focus is onCanadian films and this about those films screening today at North America’s largest documentary festival.

That said, we would be totally remiss to not notice that the big film on today’s schedule isn’t Canadian. Tonight at 9:30 at the Hot Docs Cinema it’s the International Premiere of The Bill Murray Stories: Life Lessons Learned from a Mythical Man. It runs 70 minutes and will screen three more times during the festival, twice at the TIFF Bell Lightbox and once back at the Hot Docs Cinema. Now to the Canadian content.

There are five Canadian feature-length docs on today’s schedule. There are also two shorts programs, one showcases all Canadian shorts, the other includes a Canadian short in its program.

The first Canadian feature screens at noon and is titled First Stripes. It runs 106 minutes and covers the 12-week intensive training military recruits are subjected to—willingly sign-up for—at a training camp for the Canadian Armed Forces. Directed by Jean-François Caissy, it’s a look inside boot camp where there is no rest and very little, although some, humour. Caissy was born in Carleton-sur-Mer in Québec in 1977. This particular doc isn’t a stand-alone work yet stands alone within the larger work Caissy is creating. Completely finished it is, in a way, a work in progress in that it is the third part of a five-documentary series that’s meant to be a free-flowing meditation on the stages of life.

The first, La Belle Visite, was a film about ageing, shot in a seniors’ home that went on to screen at the sixtieth Berlinale. It was followed by La Marche à Suivre in 2014, a film about teens that was shot at a rural high school. Now, in First Stripes, he explores why young people would voluntarily want to abandon civilian life with all its freedoms and embrace military life with its strict code of obedience. The young people in First Stripes give varying reasons for their choice of profession, but one stands out: the search for a challenge. You do not have to have seen the first two to appreciate this one.

First Stripes has already had its first screening at Hot Docs and will have its last on May 5th. It screens at noon today at the ScotiaBank Cinema 4.


Next up at 3:00PM is United We Fan. Directed by Michael Sparaga, anyone who has ever mourned the loss of their favourite TV show will get the premise of this doc right away. In particular if you’re a fan of Star Trek then this doc is for you. It’s primary focus is on a couple of superfans who began the letter-writing to save the sci-fi series in the ‘60s. They were also successful for in petitioning NASA and then-president Gerald Ford to name the one of the space shuttles Enterprise. There are appearances by some of the actors and some of the people behind the scene in the making of Star Trek, Veronica Mars and Designing Women.

This is the second screening for United We Stand. It’s on today at 3:00PM at the Hart House Theatre on the University of Toronto campus. It’s last screening is scheduled for this Thursday also at Hart House.


The third of the five Canadian features screening today is Cielo. It’s from Writer/Director/Producer Alison McAlpine and it’s her first feature documentary. Cielo is a Spanish word. It means Heaven. The film has been described as “a cinematic reverie on the crazy beauty of the night sky, as experienced in the Atacama Desert, Chile.” There is also a remarkable cast of characters who populate this doc, including a planet hunter, an algae collector, some Chilean cowboys, a photographer of UFOs and then there’s the director herself. Her roots in poetry help explain the visual poetry she has captured by pointing her time-lapse cameras up toward the stars, distant galaxies and all things vastly beyond our reach. She once formed a theatre company and wrote and directed plays that were presented at festivals in Canada, Ireland and France. She was encouraged towards cinema and received a commission to write a TV Opera based on a play she had written. The 2008 mid-length film Second Sight was “a nonfiction ghost story,” that screened at more than 35 international film festivals.

Your last chance to see Cielo at Hot Docs today is at 3:30 at the TIFF Bell Lightbox. It is its 2nd of only two screenings. It will have a theatrical release later this year in Toronto, New York and Los Angeles, but why wait if you can see it today.


In Canadian feature number 4, A Little Wisdom, Director, Producer, Cinematographer and Editor Yugi Kang looks at the lives of orphaned young monks living in an isolated Tibetan Buddhist monastery in Lumbini, Nepal, the birthplace of the Buddha. In particular she trains her camera on a young novice monk named Hopakuli, and through him the film looks for transcendent insights on the relationships between brothers, between friends, between teachers and student, and perhaps most importantly, between the rough and tumble lives of adolescent boys and the austere religious environment they call home.

A Little Wisdom had its first screen on Saturday. It screens today at 5:45 at the TIFF Bell Lightbox 3. It’s last screening will be on Saturday, May 5th.


The last Canadian feature today is This Mountain Life. Set in British Columbia, a province that is 75% mountains, anyone familiar with the various ranges that are grouped under the name The Rockies has wondered about how the earliest explorers or Indigenous peoples made their way through this impossibly beautiful and impossibly impassable terrain. This Mountain Life centres on a daughter and her 60-year-old mother as they make what you would immediately think is an impossible trek of some 2300 kilometres north into Alaska.

This Mountain Life runs 77-minutes and has its World Premiere tonight at 6:15PM at the TIFF Bell Lightbox 1.

The all-Canadian shorts program is titled Below The Surface. Four shorts contribute to this selection that looks a little deeper than normal into the lives lived in unique ways. One of the more intriguing titles is Jackie Torrens’ 17-minute film Bernie Langille Wants to Know Who Killed Bernie Langille, There’s a 21-minute short titled Carousel, another, the longest at 23 minutes, titled The Head & The Hand, and the last is Turning Tables, which runs 16 minutes. All together it’s a 77 minute program and as we have said before, the nice thing about shorts is if you’re watching something you don’t like, wait a few minutes because something else will be right along.