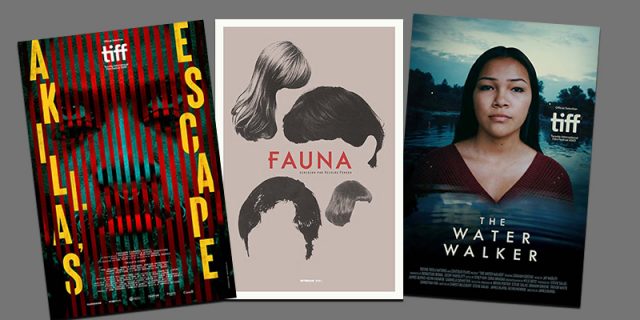 (September 4, 2020 – Toronto, ON) When the 2020 edition of the Toronto International Film Festival (TIFF) opens on September 10, there will be a wealth of Canadian films on the schedule. We took our first look last week, and cover more films this time.

Alphabetically, Akilla’s Escape is first on our list. It’s a new feature from Producer-Director Charles Officer. Akilla Brown is a drug dealer who is robbed while trying to complete a drug deal and now he owes money to the not very nice people who fronted the drugs. Condensed into a story that plays out over one night, Akilla’s Escape is set in both present-day Toronto and 1990s Brooklyn. The film examines how a cycle of violence can echo forward into new generations of young people and how difficult it is to break. Costars include Saul Williams, Thamela Mpumlwana, Donisha Prendergast, Ronnie Rowe Jr., Olunike Adeliyi, Shomari Downer, Colm Feore, Bruce Ramsay and Vic Mensa.
Public Screenings:
Saturday – Sept. 12 – 9:00 pm – West Island Open Air Cinema at Ontario Place
Sunday – Sept. 13 – 9:15 pm ET – TIFF Bell Lightbox
Tuesday – Sept. 15 – 6:00 pm ET– Bell Digital Cinema

Fauna also deals with crime and is written and directed by Mexican-Canadian Nicolás Pereda. But this is a far lighter take on the dark side of life. In fact, Fauna is a comedy that looks at how violence in Mexico has infiltrated popular imagination. Described by TIFF as having “elegant widescreen compositions, and dusty hues” this is Perada’s 9th feature, seven of his previous films have screen at the festival. In Spanish, with English subtitles, this 70-minute movie is a Mexico-Canada coproduction. Pereda was born in Mexico City and holds an MFA in film from York University.
Public Screenings:
Wednesday – Sept. 16 – 9:00 pm – TIFF Bell Lightbox
Friday – Sept. 18 – 12:30 pm ET – Bell Lightbox
Friday – Sept. 18 – 6:00 pm ET– Bell Digital Cinema

Crime, and its impact, is also the subject handled by the Côte d’Ivoire-France-Canada-Senegal coproduction Night of the Kings. Basic plot, a young man ends up in the largest prison in Côte d’Ivoire where life behind the walls is just as complex and just as dangerous as life on the outside. A lifer, an aging prisoner known as Blackbeard wants to hold onto his waning power and commands the newcomer to spin a tale from night until the sun comes up again if he wants to save his own life and at the same time prevent the prison from spiralling into chaos. The 93-minute Night of the Kings, screening in TIFF’s Contemporary World Cinema programme, is Philippe Lacôte’s 2nd feature.
Public Screenings:
Thursday – Sept. 10 – 3:00 pm – TIFF Bell Lightbox
Thursday – Sept. 10 – 6:00 pm ET– Bell Digital Cinema
Sunday – Sept. 13 – 9:00 pm ET– TIFF Bell Lightbox

Screening in TIFF’s Next Wave programme, Emma Seligman is writer-director behind Shiva Baby, a 77-minute Canada-U.S. copro. Described as a “caustically affectionate comedy,” the focus is on a character named Danielle (played by Rachel Sennott) who is a serial liar. At a shiva hosted by her parents, a seemingly endless list of embarrassments occur when various people attend. These include a Sugar Daddy she has been seeing and his wife, the arrival of an ex-girlfriend, and others. Seligman is a New York-based Toronto-born filmmaker and graduate of NYU’s Undergraduate Film & Television program. This is her debut feature.
Public Screenings:
Thursday – Sept. 10 – 6:00 pm – Bell Digital Cinema
Thursday – Sept. 17 – 12:00 pm ET– TIFF Bell Lightbox 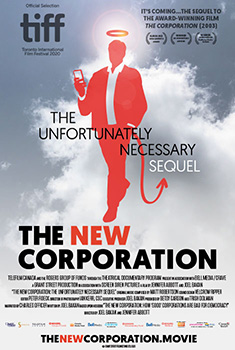 There is, finally, 17 years later, a sequel to The Corporation. Titled The New Corporation: The Unfortunately Necessary Sequel, this film exposes how companies are desperately rebranding as socially responsible — and how that threatens democratic freedoms. Co-directed by Joel Bakan and Jennifer Abbott, this 106-minute documentary should be required viewing for anyone who has plans for the future. Any plans. Some of the people interviewed for this doc include Anand Giridharadas, Robert Reich, Alexandria Ocasio-Cortez, and first-term US congresswoman Katie Porter. Joel Bakan is a professor of law at the University of British Columbia. Montrealer Jennifer Abbott is best known for 2003’s The Corporation which premiered at TIFF, won numerous awards including an Audience Award at Sundance and the Genie for Best Documentary.
Public Screenings:
Sunday – Sept. 13 – 9:00 pm – West Island Open Air Cinema at Ontario Place
Wednesday – Sept. 16 – 11:30 am ET– TIFF Bell Lightbox
Wednesday – Sept. 16 – 6:00 pm ET– Bell Digital Cinema

There’s a free short documentary but it is not part of the Short Cuts programme, and there will be only one screening of it through the Bell Digital Cinema system. It’s titled The Water Walker and follows teenaged Anishinaabe water activist Autumn Peltier as she makes the journey from Wiikwemkoong Unceded Territory to New York City to speak in front of the United Nations with the hope of preserving the future of Indigenous communities for generations to come. Directed by James Burns, an American director and 2020 Sundance Institute Fellow, this is a Canada-U.S. coproduction.

There are 18 Canadian films in the TIFF Short Cuts program. Click here for the link to Short Cuts and all TIFF 2020 films.