(September 29, 2020 – Toronto, ON) The Reelworld Film Festival has announced that Clement Virgo will be the recipient of this year’s Award of Excellence. The award honours Canadian industry leaders whose creative excellence over decades, has positively impacted the representation of Canada’s diversity nationally and Internationally.

In a media release this morning the festival said, “Clement Virgo is one of Canada’s most prominent directors, whose feature films include the boxing drama Poor Boy’s Game and the provocative Lie With Me. His films have premiered at world-renowned festivals including Cannes, Berlinale, and TIFF. Virgo’s debut film, Rude premiered at Cannes Film Festival in 1995 and won a Special Jury Citation for Best Canadian Film at the Toronto International Film Festival (TIFF). It was also featured last summer in Locarno’s Blacklight Retrospective, showcasing international Black cinema of the 20th century. 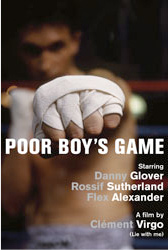 As for Television, his directing credits include Empire, The Wire, The L Word, American Crime, and the OWN series Greenleaf, where he also served as Executive Producer with Oprah Winfrey. He is currently developing BLOOM with Callie Khouri through the Obamas’ production company, Higher Ground Productions. In 2015, Virgo directed and co-wrote a miniseries adaptation of Lawrence Hill’s The Book of Negroes. It went on to win 12 Canadian Screen Awards, was nominated for two U.S. Critics Choice Television Awards and four 2015 NAACP Image Awards.”

“It is my honour to be the recipient of the 2020 Reelworld Award of Excellence,” said Virgo. “For twenty years, Reelworld has been a pioneer of creating inclusion and access for Black, Indigenous, and Canadian people of colour in the screen-based industries. As an organization, Reelworld understands the value of supporting these racialized groups and the critical mandate to focus only on Canadian talent. As a young filmmaker, Reelworld was a vital supporter of my work and will be for the next generations of screen-based artists.”

The Reelworld Film Festival stated that Clement Virgo’s works “highlight a stellar level of excellence in the film industry both at home and abroad, and is an inspiration to other Black, Indigenous, People of Colour creatives showing that they too have a place in the industry, and the opportunity to thrive.  Reelworld Film Festival runs from October 14 to 29. There will be a special One-on-One industry webinar discussion with Clement Virgo on October 16th @ 3PM EST. Click here to register for that event. Click here to learn more about all of the free Reelworld Industry webinar programs here.

Inside Out Opens with God’s Own Country