(May 3, 2018, Toronto, ON) It was one week ago that the 25th anniversary Hot Docs festival kicked off with The Heat: A Kitchen(R)Evolution from director Maya Gallus. The festival wraps in just a few days but there is still lots to see and many of those films are Canadian. In fact 11 Canadian titles are on today’s schedule.

The first film of the day screens at 10:00am, it’s the U.S. film Our New President. The Canadian content begins at 12:15 with two Canadian films. Passage is one of the films in the Focus on John Walker program. Originally released in 2008, this NFB production is a blend of drama and documentary. It’s a multi-layered story of British explorer Sir John Franklin and his crew of 128 men, who perished in the Arctic ice during an ill-fated attempt to discover the Northwest Passage, and John Rae, the Scottish doctor who 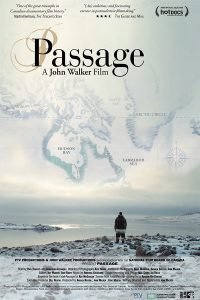 in 1851, discovered their dismal fate. Rae’s dark report, which described the crew’s madness and cannibalism, did not sit well with Sir John’s widow, Lady Franklin, nor with many others in British society, including Charles Dickens. They waged a bitter public campaign to discredit Rae’s version of events and mark an entire nation of northern Inuit with the label of murderous cannibals. A stunning face-to-face meeting between the great-great grandson of Charles Dickens and Tagak Curley, an honoured Inuit statesman who challenges the fraudulent history, vaults the story from the past into the present and we are witness to history in the making. The only screening of Passage at Hot Docs is today at 12:15 at the TIFF Bell Lightbox.

Also at 12:15 it’s United We Fan. Directed by Michael Sparaga, anyone who has ever mourned the loss of their favourite TV show will get the premise of this doc right away. In particular if you’re a fan of Star Trek then this doc is for you. It’s primary focus is on a couple of superfans who began the letter-writing to save the sci-fi series in the ‘60s. They were also successful for in petitioning NASA and then-president Gerald Ford to name the one of the space shuttles Enterprise. There are appearances by some of the actors and some of the people behind the scene in the making of Star Trek, Veronica Mars and Designing Women. This is the last screening of United We Fan and it’s at the Hart House Theatre on the University of Toronto campus.


At 2:45 there’s an eye-opening documentary about the video game industry titled Playing Hard. If you think this is about a room full of twenty-somethings toying with their laptops you’re in for a big surprise. Playing Hard is about the years-long development of one particular game and the aging genius who held the entire plot in his head for years before the real work began. It’s a film about dreams realized and dreams crushed and is punctuated with details about the industry that are startling. For example, it’s big news if a film makes a billion dollars, but it seems as if in the gaming industry that’s just the beginning and it often takes hundreds of millions of dollars to create a new game. A game that involves real people going through the actions while hooked up to motion-capture cameras. It’s bigger than Hollywood and the stakes are enormous. Directed by Jean-Simon Chartier, the genius behind a game that features Vikings and Knights and Samurai is Jason VandenBerghe (pictured above), the driven artist behind the Ubisoft game For Honour. This is Playing Hard’s second screening and it’s at the Scotiabank 13. It’s last of three screenings is tomorrow night at 8:15 also at the Scotiabank.
At 3:15 it’s the second screening of Bachman, following its World Premiere last night. If you grew up at a certain point in Canadian rock ’n’ roll history one of the names you would have heard almost constantly was Randy Bachman. In 1974, Bachman Turner Overdrive was one of the biggest bands in the world with classics like Takin’ Care of Business and You Ain’t Seen Nothing Yet. This is the story of its founder Randy Bachman, from his early days with The Guess Who and hits like American Woman to today. As one of the few legendary artists to reach #1 in two separate bands, Bachman’s singularly focused goal of music has taken him from spectacular highs to crushing lows and back again, where today he reigns as one of the most prolific and legendary artists in the history of Canadian music. Simply titled Bachman, the 80-minute doc from director John Barnard features interviews with many of Bachman’s friends, family and fans including Neil Young, Alex Lifeson (Rush), Peter Frampton, Buffy Saint-Marie, Paul Shaffer and Chris Jericho. This second screening of Bachman is at the TIFF Bell Lightbox.

At 3:30, Julien Fréchette’s film My War has its last screening at the Scotiabank 3. Part of the festival’s Canadian Spectrum, this 97-minute doc from the National Film Board (NFB) centres on four Western volunteers who risk their lives to fight ISIS. They are four out of hundreds of Western volunteers who have joined the Kurdish armies in Syria and Iraq. The film tries to answer the question, What drives some Canadians to put their lives on the line and take up arms halfway around the world? My War screens today at 3:30 at the Scotiabank Theatre 3.


At 4:00pm there’s another film from the Canadian Spectrum and it’s the truly frightening documentary titled The Guardians. Set in the US city of Las Vegas, Toronto filmmaker Billie Mintz delves into the legalized seizure of property, money, bank accounts, wills, in fact the very lives of older people who are hospitalized against their wishes or need in a scheme that is in every way a scam. As one participant in the film states, “If you’re going to retire, do not move to Las Vegas.” At 104 minutes it’s a long film but compelling filmmaking and well worth the time. The Guardians has its second screening at the Elizabeth Bader Theatre.

At 6:15 it’s What Walaa Wants. Raised in a refugee camp in the West Bank while her mother was in prison, Walaa is determined to survive basic training to become one of the few women on the Palestinian Security Forces – not easy for a girl who breaks all the rules. Following Walaa from 15 to 21, with an intimate POV and the exuberant energy of its subject, this is the story of a young woman navigating formidable obstacles, learning which rules to break and which to follow, and disproving the negative predictions from her surroundings and the world at large. This is Director Christy Garland’s 6th film and it screens at 6:15pm at the TIFF Bell Lightbox 2. It will have its last screening tomorrow, May 4th.

Take Light has its final screening this evening. While just about everybody in North America is aware of the struggle to keep the lights on in the devastated American island of Puerto Rico, it has almost totally escaped us that there’s an equally unbearable situation in Nigeria. Directed by Shasha Nakhai, this first feature documentary examines the state of the electrical grid in Nigeria, where over half of the population lives without a consistent supply of electricity. Take Light screens at 6:30pm also at the Scotiabank 3.


Tonight at 7:00 at the Elizabeth Bader there’s something very special from Hot Docs. It’s titled Postings From Home. It’s a live performance piece from filmmaker Kelly O’Brien. Once upon a time in family rec rooms or living rooms, someone would set up a slide projector and everyone would gather round to share the photos taken on someone’s birthday or at Christmas or the last family vacation. It was a tradition that has become a daily non-event on social media websites. That’s the idea behind this production. Culled from five years of daily photo essays posted on Facebook, O’Brien takes the collective sharing of personal life on social media and combines it with the 20th century family slideshow. First presented in 2016, O’Brien’s eclectic mix of stories, reflections and quotations from artists, philosophers and her kids provides the narrative for her photographs and short films. From the wonders of motherhood to the challenges of raising a child with disabilities, from funny anecdotes about growing up to anxious thoughts about the future at a time of political and environmental crisis, Postings From Home is a very special work that should not be missed and it’s on tonight only at 7:00 at the Elizabeth Bader Theatre.

At 8:45 at the Scotiabank there’s the story of one woman’s struggle for respect. Titled Slut or Nut: Diary of a Rape Trial, the 70-minute doc from Kelly Showker follows Mandi Gray as she’s forced to grapple with a police force, university administration, and legal system unwilling to take seriously her report of rape by a fellow PhD student. Frustrated by a system stacked against her, Gray turns to activism to advocate for herself and other women like her. This is the second screening for Slut or Nut: Diary of a Rape Trial. Its last screening is scheduled for tomorrow.


The last Canadian film that we could find on today’s schedule is titled Love, Scott. It’s from the National Film Board and is part of the festival’s Canadian Spectrum. It begins in October 2013, Scott Jones is a young Nova Scotian musician who is quietly walking home from a night out with friends when a sudden act of vicious homophobic violence changes his life forever, leaving him paralysed from the waist down. Laura Marie Wayne, one of his closest friends, was studying film in Havana at the time. “I flew to Halifax, terrified, but knowing I needed to be by Scott’s side. I also knew that I needed to bring my camera.” She and that camera would stay close to him for the following four years. Love, Scott runs 76 minutes and tonight is its last screening at 9:15 at the TIFF Bell Lightbox.