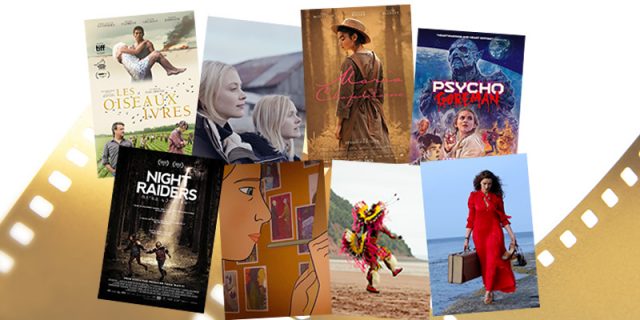 Our Top CDN Films of 2021
by Thom Ernst, Film Correspondent

(December 31, 2021 – Toronto, ON) It might seem a fruitless exercise to compile a best-of Canadian film list, knowing that such a list will never again include a film by Jean-Marc Vallée. But a best-of-list can serve as a significant reminder of Vallée’s contribution to Canadian cinema, a list that effectively represents the lasting influence of Vallée’s craft, and as an example of what Canadian filmmakers can achieve.

And though I cannot confirm whether Vallée would agree or take exception to my list of top Canadian Films of 2021, I nonetheless dedicate this list to the memory of Jean-Marc Vallée.

Drunken Birds is Canada’s official entry for this year’s Foreign Film Oscar category. Whether it succeeds in its run for an Oscar is yet to be seen, but it’s a winner on all other playing fields. This is a story about a man dedicated to finding the woman he loves even as fate tosses incredible hurdles in his path, the least of which is that the woman is the wife of a Mexican drug lord. But despite its Robert Rodriguez set-up, this is an immigrant story worthy of John Steinbeck with the cinematic impact of a younger Denis Villeneuve. Director Ivan Grbovic keeps the film skirting on the hems of a mystery, exquisitely told with a patience that is not to be confused with being slow. Nominations for the 94th Academy Awards will be announced on Tuesday, February 8, 2022.

All My Puny Sorrows is still to be released. This ranks as one of Michael McGowan’s best films to date. And he’s made a few good ones. Based on the Miriam Toews novel of the same name, All My Puny Sorrows deals with the relationship between two siblings: a successful concert pianist (Sarah Gadon) and a struggling author (Alison Pill). One of the sisters is suicidal. It may not be a happy story, yet McGowan finds plenty of room for an apt display of affection, heart, and unexpected humour.

Maria Chapdelaine Director Sebastion Piorotee has never failed to impress me with his ability to find the depth of human kindness and stoic strength. Maria Chapdelaine, his first historical biographical film, delivers. With a stunning performance from Sara Montpetit in the title role and beautifully shot by Michel La Veaux, Maria Chapdelaine becomes an unforgettable film that is truly one of this year’s best.

Psycho Goreman is a genre fan’s dream come true. But only if your dreams are weird, outrageous, violent, and hilarious. The movie is filled with cheezy effects that shouldn’t work but do, a plot that shouldn’t make sense but does, and over-acting that should be thumbs down but isn’t. The film is all the better for an insanely over-the-top performance from Nita-Josee Hanna as Mimi, a little girl capable of making a psychotic being from another planet, do her bidding. If you don’t find Psycho Goreman entertaining, gross, irreverent, and hilarious, then you are watching the wrong movie. 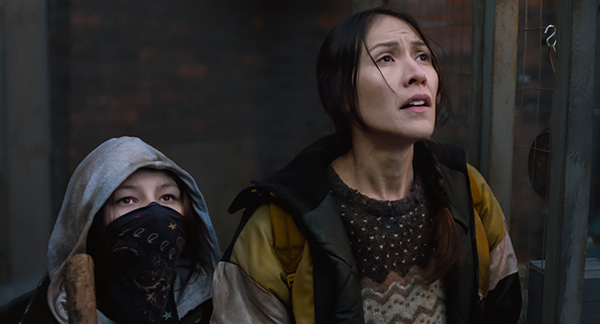 Night Raiders by director Danis Goulet is a feature debut that challenges how a feature debut film should look. Goulet repositions one of the worst marks in Canadian history as a science-fiction thriller. Night Raiders is a story about the past told in the future. Elle-Máijá Tailfeathers stars as a Cree mother who believes she is helping her daughter by delivering her into the hands of a state-imposed education camp. Similes between the past and the future and conventional science-fiction tropes—the collapse of society, a military state, dystopia, and unidentified flying orbs—create a film rich in social relevance and equally entertaining.

Charlotte is an animated feature about artist Charlotte Salomon who rose to limited fame during Hitler’s fascist regime. Confined, sometimes, within my cinema universe, I didn’t know Charlotte Salomon as an artist, much less her story of resilience in the face of extreme adversity, living as a German-Jew in 1940s Berlin. Nor is her life held captive by the demands of a seemingly unloving grandfather who controls her every move. But perhaps my ignorance is not so unusual, as history seems to have worked hard to keep Charlotte’s life a secret. Thankfully directors Eric Warin and Tahir Rana have reached back and delivered her story not so much as a historical biography, but an engaging and surprisingly in-depth.

Wildhood. When first encountering director Bretten Hannam’s Wildhood, I wrote: Wildhood is a coming-of-age story told through the conventions of a road movie; either that or it’s a road story told through the conventions of a coming-of-age film. Either way, every bit of director Bretten Hannam’s film works. What’s remarkable, among many things including a break-out performance from Philip Lewitsky and another stand-out performance from Joel Thomas Hynes, is that Hannam finds purpose in each of his characters, whether they guide us through the entire story or pop up briefly at a roadside convenience store. It’s a moving and excellent debut.

Carmen is a film you likely haven’t seen unless you were lucky enough to catch it at a festival screening. Look for its release; this is a wonderfully touching and magical story from director Valerie Buhagiar. Buhagiar lines up the narrative of a woman suddenly left without a life. That is, her brother, the local priest to who she has spent her life serving and attending, has died. She now has nowhere to live and no knowledge on how to live. There is a slight tilt towards being Capra-esque in the movie’s depiction of Carmen granting unadulterated advice while secretly hearing the confessions of the broken residents in a seaside Malta village circa 1980. Imagine Chauncy Gardner making his way along the stone steps and cobble streets of Malta. The film is greatly served by the exquisite photography of Diego Guijarro and performances by Steven Love and Natascha McElhone as Carmen.

Festival News from All Over

The Top 10 Canadian Films of the Decade