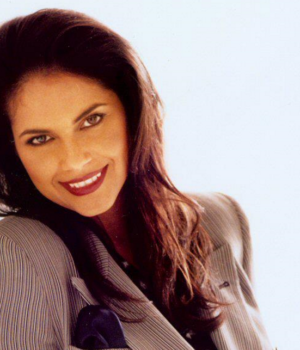 (February 18, 2016 – Toronto, ON) She was better known as Vanity but started life as Denise Katrina Matthews in Niagara Falls, Ontario. She went on to become a minor pop icon usually remembered for being part of the singing group behind Prince called the Vanity 6. Her life in the limelight was short and oh so very hot, often appearing in concert dressed in little more than lingere so as to accentuate the sexiness of her songs and of the woman herself. She posed twice for Playboy magazine, once in May, 1985, and again in April, 1988.

Her mother was German while her father part Native and part African-American and she admitted that she came from “a dysfunctional family.” Her parents divorced when she was young, and her mother suffered from alcohol abuse and depression. Matthews began entering local beauty pageants before moving to Toronto, where she modelled. She won the Miss Niagara Hospitality title in 1977, and went on to compete for Miss Canada in 1978.

In 1994 Matthews gave up her stage name and turned to religion as a born-again Christian. She said it was the year she almost died from the effects of her daily drug abuse and unhealthy living. She spoke at churches across the U.S. and worldwide. In 2010, Matthews released her autobiography, Blame It on Vanity. No cause was given when it was announced that she had died in hospital in Fremont California on February 15, 2016. Denise Matthews was 57.