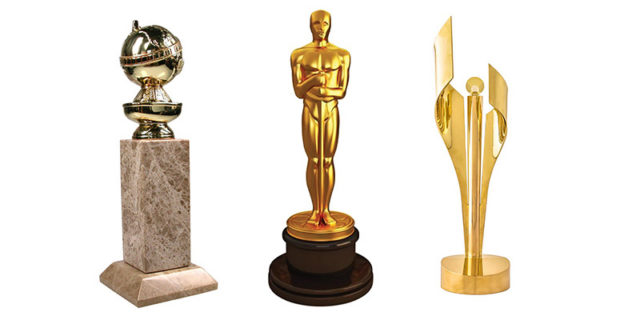 (January 14, 2021 – Toronto, ON) What a difference a year makes. We entered 2020 unknowing what would unfold in the first few weeks and how much it would impact every facet of life, including the often overly frivolous awards shows that sometimes offer more glitz than substance, more shiny objects than solid content. Yet, they attract fans of individual actors, directors and all the talented people in front of and behind the cameras on the big screen and the small screen, as well as those who have become fans of specific films that have been nominated and want to see if their favourite movie or TV show wins an award.

If you pay attention to these things, you’ll immediately see that the dates when things happen have changed, some more than others, even this article. Last year we published our look ahead at award shows on December 3, 2019. This piece isn’t late, it’s just in keeping with the rest of the industry.

The New York Film Critics Circle usually leads off the year and in 2021 they did that again naming Nomadland the best film of 2020 earlier this month. It was their 55th annual celebration of film. Possible Oscar® favourite Chloé Zhao, who wrote and directed Nomadland, was named best director, and Joshua James won for best cinematography. Frances McDormand won best actress for her subdued yet powerful role as Fern. Nomadland was given the coveted 2020 People’s Choice Award at the Toronto International Film Festival (TIFF).

Speaking of film critics, both the Toronto Film Critics Association (TFCA) and their Vancouver counterpart, The Vancouver Film Critics Circle (VFCC) are usually among the first to announce their decisions on the best films of the previous year. This year the TFCA members will vote in early February and their annual gala, usually a big affair at Toronto’s posh Carlu, will be live streamed on March 9. What makes the TFCA very interesting to watch is their $100,000 Rogers prize for best Canadian film. The VFCC will announce their Canadian and International Nominations on Friday, February 19th, 2021, followed by the announcement of International Winners a few days later on Monday, February 22nd and then the VFCC Awards Presentation and Announcement of Canadian Winners on Monday, March 8th, 2021, one day before the TFCA.

The Hollywood Foreign Press Association’s Golden Globes award show usually happens very early in the new year, but for 2021 things have been pushed back a bit. This year the 78th annual awards show will take place on Sunday, February 28. Hosted by Tina Fey and Amy Poehler the Golden Globes will air live on NBC from The Beverly Hilton in Beverly Hills, California.

The Writers Guild of America will announce their 2021 nominees in early March. Their awards ceremony is scheduled for March 21. The 2021 Producers Guild Awards show ceremony will be held on March 24th. Early in February, the 4th to be exact, the Screen Actors Guild will announce their nominations for the 2021 awards. The 27th Annual Screen Actors Guild Awards will be handed out on April 4 and will be broadcast on the US channels TNT and TBS.

The pandemic has also caused many if not all awards organizations to adjust the rules that govern submissions. While not the biggest, certainly one of the most prestigious awards are the BAFTAs. BAFTA stands for the British Academy of Film & Television Arts. For the 2021 awards only, films that were intended for theatrical release but ended up on an “approved commercial VoD platform” because cinemas shut down may qualify, provided they meet BAFTA’s other eligibility requirements. This year’s awards will take place on Sunday, April 11, about two months later than usual.

April is also the month chosen for the 2021 Academy Awards. Originally set for February 28, the impact of the COVID-19 pandemic has been particularly fierce in California. The 2021 nomination process starts February 1 with voting ending this year on February 5. The Oscar® shortlists will be announced on February 9. Usually the most anticipated award show of the year, “the Oscars®” will take place on April 25, 2021, broadcast live from the Dolby Theatre in Hollywood. We assume the announcement of the nominees will be carried live on CTV as it has been over the past several years.

The Academy of Canadian Cinema & Television will release their list of nominees for the 2021 Canadian Screen Awards on March 23. This year Canadian Screen Week will take place from May 17, 2021 through May 20, 2021.

I have some thoughts about the Canadian Screen Awards, but that’s for another article.

Québec will celebrate its best films and filmmakers at the 2021 Gala Prix Iris. They are now open for submissions and there are three new categories, Music, Documentary and Short Film. No date has been announced for the 2021 Gala.

The deadline to submit to the 2021 Leo Awards is January 18, just four days away. We don’t have a date for when the Leos will be announced. The Leo Awards are a project of the Motion Picture Arts & Sciences Foundation of British Columbia.