(October 6, 2021 – Montréal, QC) This year’s Festival du nouveau cinéma is paying long overdue homage to the first Quebec feature film made by a woman, Mireille Dansereau’s 1972 La Vie rêvée (Dream Life). The movie revolves around two women searching for Mr. Right. Still active, Dansereau’s sensitive filmmaking should have landed her in the upper echelons of Canadian moviemaking, but it didn’t.

Back in the day, I wrote a review asking why Dansereau’s 1987 picture, Un sourde dans la ville “hasn’t received, in this country, the attention it deserves. Le Sourd did not get a single Genie nomination, while at the Venice Film Festival, it shared an award with Louis Malle’s Au Revoir les enfants. Maybe the members of the Academy would have been more sympathetic if Florence (played by Beatrice Picard) had shot an elephant.” (The elephant was a reference to Jean-Claude Lauzon’s Un zoo la nuit, which in the same year drew nonstop, adoring attention.)

The FNC’s 2021 programme continues the event’s 50-year-old embrace of movies that nudge viewers into unknown territory. For instance Brazilian director Iuli Gerbase’s debut feature, The Pink House, plays as a dystopian comic satire that echoes the 2018 sci-fi hit, Bird Box. An amorous couple, trapped a lockdown, hides from malevolent pink clouds that threaten to poison the entire human race. The couple’s only connections to the outside world are a feeding tube, video calls, and virtual reality. In other words, the way I’ve been living for COVID-haunted months.

In Henrika Kull’s Bliss, 42-year-old Sascha (Katharina Behrens) works at a Berlin whore house that’s clean, efficient, and responsibly run – and a little on the boring side. The whores call the shots, saying forget about it to clients who turn them off. The story kicks in when 25-year-old Italian Maria (Adam Hoya, an actual sex worker/ performance artist), and Sascha get a glimpse of ol’ black magic in each other. Complications ensue. 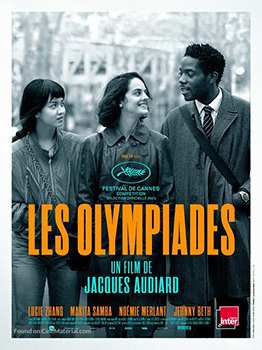 In the FNC selection, Barbaque, or Some Like It Rare, director Fabrice Eboué zeroes in on a butcher plagued by bad business resulting from vegan protests. Then the guy manages to inadvertently kill an activist. To hide the body, he and his wife-business partner turn the corpse into delicious ham, which becomes the town’s number one taste treat.

Another must-see for many, the last minute, surprise screening of Denis Villeneuve’s Dune, in person at the Imperial theatre on October 17.

The Festival du nouveau cinéma (FNC) opens today in Montréal. Click here for a link to the FNC and other October 2021 film festivals.